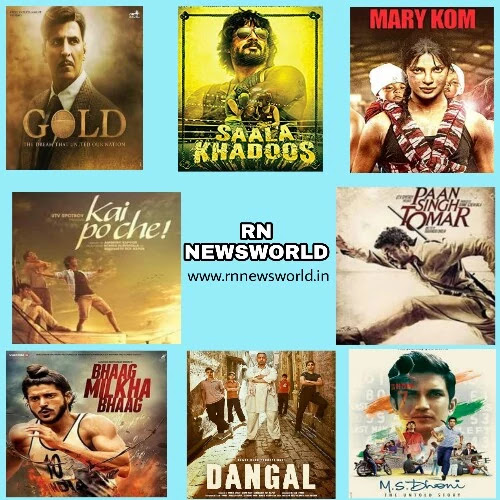 The success of a movie is directly connected to the engaging content of that movie. Yes if a movie can grab the attention of the audience and make them completely engaged definitely the movie is going to be a hit.

Sports and games also provide same engagement to its audience. So when we make a movie based on sports definitely it will get complete engagement from the audience and will become a hit. This fact has been proved in Bollywood with so many sports based movies.

Some of the top 8 bollywood movies made based on sports and games last 10 years. The countdown for top sports based movies made in hindi.

Akshay Kumar’s character Tapan das wants India to win the Gold medal as an independent nation. The Movie portrays Tapan Das’s dedication and struggles to prepare a team for the 1948 olympics and how he manages to win the goldmedal even after few Indian players leave due to partition of India. This motivational sports based movie is directedby Reema Kagti and produced by Farhan Akhtar and Ritesh Sidhwani.

Saala Khadoos is another motivational sports drama which portrays the dedication of a boxing champion to accomplish his dream. This 2016 movie was simultaneously released in Hindi and Tamil featuring R. Madhavan in the lead role. He delivered the role of a former boxer who becomes victim to the dirty politics in the boxing association. Madhavan’s character Adi Tomar needs to quit boxing following fall out with the authorities and loses his chance to go to ’96 olympics.

15 years later he becomes the coach for the national women’s boxing training academy and coaches a fisher woman to fulfill his dream through her. Adi Tomar faces difficulties while coachingas well but eventually helps Ezhil Madhi played by Ritika Singh, to win the World Boxing Championship.

The movie also focuses on India’s women athletes difficulties in training and partiality in selection process. Raj Kumar Hirani was the producer of this sports drama written and directed by Sudha Kongara. Ritika Singh won many awards for her performancein Hindi and Tamil versions of this movie. Saala Khadoos also got special jury menionin 63rd Naional Film awards

Mary com is another sports drama based on Boxing in this list. This is a biographical movie of Indian Boxing champion Mangte Chungnei jang Mary Kom. Priyanka Chopra portrayed the role of Marycom who went through several hardships before fearlessly achieving her ultimate dream. This Omung Kumar directorial movie was premieredat the 2014 Toronto International Film Festival, becoming the first Hindi film to be screene don the opening night of the festival.

This women centric sports drama was a commercial suuces and praised by critics for it’s direction and brilliant performance of Priyanka Chopra. She got several awards for the movie. Mary Kom also won the Best Popular Film Providing Whole some Entertainment at the 62nd National Film Awards.

Kai Po Che released In 2013 was the very first movie of recently demised youth star Sushant Singh Rajput . The movie is mainly focusing on three friends who are cricket enthusiastic. Hence they start a sports academy to train budding cricketers. Sushant Singh plays the role of Ishan bhuttan ex-district level cricketer who is a victim of politics in the cricketing selection fraternity. He trains young boy Ali to become a national level cricketer.

The film tracks the deep friendship of Ishan,Omiand Govind played by Sushant Singh, Rakumar rao, Amit Sadh respectively and their innocence blemished by religious politics and communal hatred. This Abhishek Kapoor directorial movieis based on Chetan Bhagat’s Novel The three mistakes of my Life. Kai Po Che had a world premiere at the 63rd Berlin International Film Festival.

The movie is about Paan Singh Tomar, an athlete who won gold medals at the Indian National Games seven times in a row. A part from being an athlete Pan singh tomar was a soldier in the Indian Army, but was forced to become a rebel against the system. He became a dacoit when his mother is murdered and the police don’t take any action. Irrfan Khan played the title role in this biographical sports film directed by Tigmanshu Dhulia.

Bhaag Milkha Bhaag was the first biopic to be made on a sports person in Bollywood. When the movie became a super hit, there were many other films made based on the biography of sports person. This biographical sports drama film directed by Rakeysh Omprakash Mehra is about Milkha Singh who won a Gold medal at the 1958 Olympics for India.

The movie revolves around Mikha Singh’s struggles and how he over comes many agonizing obstacles in order to become a world champion, Olympianand one of India’s most iconic athletes. Farhan Akhtar plays the role of Milkha Singh and gets into the skin of the Flying Sikh, with his pronunciation, gesture and body language,completely transforming in the role.

Bhaag Milkha Bhaag was a commercial successof 2013. It also praised by critics and won the National Award for Best Popular Film 2013.

Dangal is the highest-grossing sports film ever made world wide. This biographical sports drama film directed by Nitesh Tiwari and produced by Aamir Khan was released in 2016 and was a record-breaking commercial success, becoming the highest-grossing Indian film ever. The movie portrays a former wrestler Mahavir Singh Phogat, who decides to accomplish his dream of winning a gold medal for India by training his daughters for the Common wealth Games.

Amir Khan as Mahavir Singh Phogat steeled the hearts of millions and well praised by critics. This movie a biggest example for how a sports based movie grabs adudience attention and make them completely engaged. Dangal bagged several awards including International and National awards.

If we watch this movie after the case of Sushanth Singh Rajput, it will definitely bring tears on our eyes because we will miss that highly talented actor who came to Mumbai from a small town to accomplish his dream. When the movie was released in 2016 many have gone to watch it as the Fan of Mahendra Singh Dhoni and returned as admirer of Sushanth Singh too. His dedication, talent and perfection wasre flecting on each and every scene of the movie.

M.S. Dhoni: The Untold Story is considered as the best movie of this actor passed away at his 34. This movie came as number one in this list because of it’s brilliant portrayal of life of a sports man in a dramatic, emotional and highly engaging.