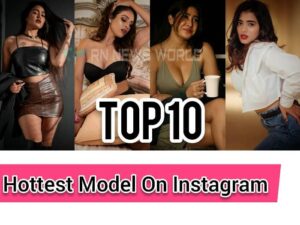 Instagram is and will always be sure one of the most popular and well-liked photo and video-sharing trending social media apps. Several famous artists from various professions will be able to show their skill through reels.

Those in the modelling industry, in particular, have a big possibility to become popular and famous on Instagram. The same can be said for India, where you can find a plethora of the hottest and beautiful Indian models on Instagram. Finding the top 10 hottest models on Instagram in India took a lot of time and effort. However, we have successfully compiled a perfect list of such young hot Indian Instagram models who are well-known and have large Instagram fan bases.

Neha Malik, who has over 3 million Instagram followers, is the most beautiful and hottest model on Instagram in India 2022. She also appears in a number of album video tracks as an actress. This gorgeous 32-year-old of 2022 model was born in Mumbai on October 31st, 1990, and began her modelling career in 2012. Neha Malik took part in Dubai Fashion Week and Bangkok Beach Fashion Week as well.

In the Hindi film Bhanwari Ka Jaal, Neha Malik made her acting debut. She is approximately 5 feet 6 inches tall and has a large figure. On her Instagram, you can see some of her beautiful images and short exercise videos that have received a lot of likes and comments. Neha trending song Sakhiyaan, composed and sung by Maninder Buttar, is one of the top music videos, with over 440 million views.

In this list of the hottest Indian models on Instagram, Anveshi Jain is ranked second. She was born in Madhya Pradesh on June 25th. She rose to prominence with her appearance in the Indian Hindi web series GandiBaat 2. Anveshi Jain is generally known as India’s most attractive actress, model, anchor, and television host.

She began her profession as an electrical engineer before moving to modelling, motivational speaking, relationship coaching, and acting. She’s also highly popular on Instagram, with over 2 million followers. According to reports in the media, Anvenshi will make her film debut in Tamil films, as well as on Netflix and other online video platforms.

Ketika Sharma is now ranked 3rd on Instagram’s list of the hottest Indian models in 2022. She is an Indian actress, rapper, model, media influencer, and YouTube celebrity. She was born in New Delhi on December 24, 1995. She currently has 1.9 million Instagram followers, with a large number of likes and comments on each of her photos and videos.

Her Dubmash video clips, in which she appears to be gorgeous, have gone viral on the internet. She is become popular for her social media appearances and her abilities in a variety of fields. Ketika is a single, personality woman who is always busy with her career.

She appears to be entirely focused on her profession rather than being in a relationship. She is content with her solitary existence and maintains a high standard of living. She doesn’t give any details about her lover, according to her relationship history.

Sofia Ansari is a stunning and passionate Indian Instagram model who is known for her bold and attractive Instagram photos. Her sizzling and gorgeous photographs are the major cause for her recent Instagram popularity. Sofia became famous after posting lip-syncing videos on Instagram. She mainly uploads vlogs and short videos on YouTube.

Sofia Ansari is another new internet celebrity these days. If you use Instagram, you may have seen her hot photos and videos on sometimes. She is the most well TikTok star. She frequently updates her Instagram account with very hot photos, videos, reels, and stories that engage her followers.

Shivani Narayanan is one of the most popular Indian models on Instagram, known for her stunning modelling photographs. She is also an Indian actress who works primarily in Tamil films and television. Shivani made her television debut in ‘Saravanan Meenatchi Season 3’, a TV serial. She came to popularity after acting ‘Sneha’ in the “Pagal Nilavu” serial.

She has participated in Bigg Boss 4 Tamil, a reality show. Shivani was born in the Indian state of Tamil Nadu, in the city of Manali. When she was in high school, she began modelling career. She competed in beauty pageants and fashion shows at the city level.

Garima Chaurasia was born in Haridwar, Uttarakhand, India, on August 28, 1997. She is well-known for her funny and romantic lip sync videos. She gained fame after uploading a tik tok video for the song “Bhot Hard.” She has a million Instagram followers. Her hot Instagram photos and videos attract people from all over India, resulting in an increase in followers. She is the hottest Indian models in 2022.

Ruma Sharma is an Indian model and television actress. She began her career in the Shree Ram Centre Auditorium in Delhi when she was six years old. Jasoos Vijay was the name of her second show, which was produced by BBC World.

Beautiful actress Ruma Sharma, an Indian model and television actress, was born on October 6, 1995. she is living in Mumbai. She has worked on various TV programmes, including Woh wali Picture, 100% Pleasure, and Guardian, and is one of the most dynamic and hottest Indian models on Instagram. Ruma Sharma maintains her Instagram account on a regular basis.

Richi Shah is among the hottest and most popular Indian fitness models on Instagram right now. She shares always her fitness and gym photos and videos on her social media account. She is also Model, Social Media Influencer, Blogger. People follow her on Instagram in order to learn about fitness and modelling.

She has also published several fitness blogs and is one of India’s most popular fitness models. She also high amount of fan following on her instagaram account.

Aabha Paul is the most well-known television actress. She also works as a host, model, and actress. She is completing a career as an actress in Indian cinema. She is well-liked by the general public due to her frank personality. She was born on August 7, 1989, in the state of Uttar Pradesh.

Aabha began modelling in 2005 and competed in the Miss Delhi pageant in 2006. She’s also influenced a number of advertisements with a number of well-known fashion designers, including Manish Malhotra, Anurag Jaiswal, and Ritu Beri. She has also appeared in Tamil films.

Ekta Maru, a 23-year-old hot Indian fashion model with a large following on Instagram, is well-known in India for her hot photoshoots. Her lifestyle writing and modelling have helped her get a huge popularity there.

She is a model as well as a well-known fashion blogger. Her attractiveness and beauty helped her earn 510k Instagram followers. She is also well–known for her stunning Instagram photos and videos. She possesses a good attitude as well as great modelling skills. She is currently one of the most hottest Indian female models on Instagram 2022.