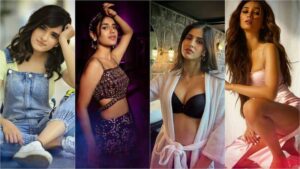 Follow the link to learn about the girls who will be Female National Crush of India in 2022, as well as the top 10 female national crushes in India.

Nowadays, the fastest and easiest way to have anything go viral across the country is to use social media. If people like something, they’ll spread it around the internet until it becomes well-known across the country. Our most recent piece on the top 10 people in India who became famous suddenly because to social media is a great example of this.

She is the top ranked position of the top 10 female National Crush of India in 2022. Rashmika began her acting career with the film Kirik Party, directed by Rishab Shetty. She was officially chosen for the part after the Kirik Party team held tryouts in 2016. In the South Indian film industry, Rashmika Mandanna is a well-known beautiful actress. Keep a watch out for her in the next film Pushpa, in which she will co-star with Allu Arjun. Her roles in the films ‘Anjani Putra’ and ‘Chamak’ have already won her fans. At Bangalore’s top model contests, she was picked for ‘La Mode Bangalore’s Top Model.’ She has previously won the ‘Clean and Clear’s Fresh Face of India’ competition. She is now regarded as one of best fitness actress.

She’s also known as Punjab’s Aishwarya Rai and India’s female national crush. Himanshi Khurana, one of India’s most beautiful ladies, rose to prominence after appearing in Hardy Sandhu’s Punjabi song “Soch.” She was a medical science student. Her father wished for her to become a nurse. Her dream of becoming a star, on the other hand, became a reality. A family member told her that she is really photogenic and should explore modelling. After a few months, she joined the Miss Ludhiana Contest and was proclaimed the winner. She went to Delhi after winning several beauty pageants and worked for various businesses.

She also appeared as a competitor on Big Boss 13, when her romance with Asim Riaz drew much attention. Surma Bole, Distance, High Standard, Khyaal Rakhya Kar, and more Punjabi music videos include her.

Do you know the girl in the video with the heart-stopping wink? Priya Prakash Varrier is her name. The wink scene was taken from the film “Oru Adaar Love.” The tape was a hit with viewers all around the world, and it was shared on social media. She reached 650k Instagram followers in one day and became India’s female national crush suddenly. Her aim is to work in the Bollywood movie industry.

Priya Prakash is a skilled dancer, actress, model, and vocalist. She is a classically trained dancer. In 2017, she began her career. In 2018, she most searching girl in Google. In an interview, she expresses her ambition to work with Dhanish, Suriya, Vijay, and Vijay Sethupathi. She is also 3rd position of national crush of india female 2022 lists.

Bollywood actress Disha Patani is India’s all-time most popular national crush. Disha starting her fill career as a Telegu Film Loafer. After some months, she made her acting debut alongside Sushant Singh Rajput in the biography of famed cricketer Mahendra Singh Dhoni in the film MS Dhoni. As a result of this film, her career started up.

She has signed on to a number of extremely blockbuster films, like Baaghi 2, Malang, Radhe, and others. This actress, on the other hand, is more interested in fitness, dancing, and boxing. Her social media posts show this.

Sanjana Sanghi became well-known after appearing in the films Hindi Medium and Fukrey. She went on to star in the blockbuster famous film Dil Bechara work with Sushant Singh Rajput. But it was with the film Rockstar that she launched her Bollywood career. This adorable girl has been in advertisements for Coca-Cola, Tanishq, Myntra, and other brands.

Smriti Mandhana is the list of top 10 national crush of India in 2022. She is one of the India’s most beautiful female cricketers. In the twenty international women’s matches, she had the fastest fifty for India. Her popularity has increased as a result of her performance. Her mastery of the playing and charming personality have won the hearts of many. In a limited amount of time, Smriti becomes well-known throughout the country.

She is one of two Indians who have played with Australia’s famous Big Bash League. She was the Brisbane Heat’s representative in the lawsuit. Apart from that, she is the only female cricketer to be named to the 2016 ICC Women’s Team of the Year.

Amyra Dastur is a well-known Indian actress who has acted in films in a variety of languages, including Tamio, Telegu, Hindi, and others. Her lovely curves, along with a cute expression, make the body into a star in the glamour industry.

She has aspired to be an actress since she was a child. She began modelling at the age of sixteen. In the film Isaaq, she made her acting debut. She began her modelling career in advertisements for brands such as Vodafone, Dove, Clean & Clear foaming face cleanser, Airtel, and others. In addition to modelling, she walked for a number of well-known fashion designers.

Following her involvement on MTV’s India’s Next Top Model Season 2, Akanksha came to greatness. She did, however, want to complete her education following that. Akanksha feels that education is everything, and that excellent marks in both education and appearance may exist. You might call her the expression of beauty with brains.

Sakshi Sarma’s daughter, Akanksha Sharma, started her career as a model. She was born in Haryana and received her architectural degree from Indraprastha University. She’s taken part in several fashion shows and walks, including Fab India. She was just named one of India’s most beautiful national crush of India female for the year 2022.

Introducing another gorgeous B-town lady who has become India’s national crush all days. Sakshi Malik also 9th position of top 10 female national crush of India in 2022. She worked as a Toabh model in the start of her career. Sakshi Malik has dreamed of becoming a model since she was a little girl. In college, she used to participate in numerous fashion exhibitions and planned her future career similarly. She made her Bollywood debut in the year 2018 with the popular Bollywood film Sonu Ke Titu Ki Sweety.

This stunning young lady was previously included in the hits popular song ‘Bom Diggy Diggy,’ and became an online star as a result. She now has 6.1 million Instagram followers. She was born in New Delhi and then shifted to Mumbai. She is an IITian who completed her engineering degree from IIT Roorkee and is currently employed by Delhi Metro as Chief General Manager. She currently draws attention to herself by posting beauty images and videos on her social media pages.

Obviously, her beautiful looks combined with her sweet voice became her India’s most popular national crush of India. Shirley Setia is an Indian singer who got famous on the internet at a young age. Shirley Setia has been honoured with the BIG Golden Voice Award as well as the Outlook Social Media Awards.

She aspired to be a Bollywood actress since she was a youngster. This opportunity came later, thanks to the T-Series contest. During her college years, she worked as a radio jockey. She began singing on YouTube after winning the T-Series program, and musicians from the United States, the United Kingdom, India, and Canada contributed on her songs. In short time period, she had become an internet phenomenon with a gained million of fan base.