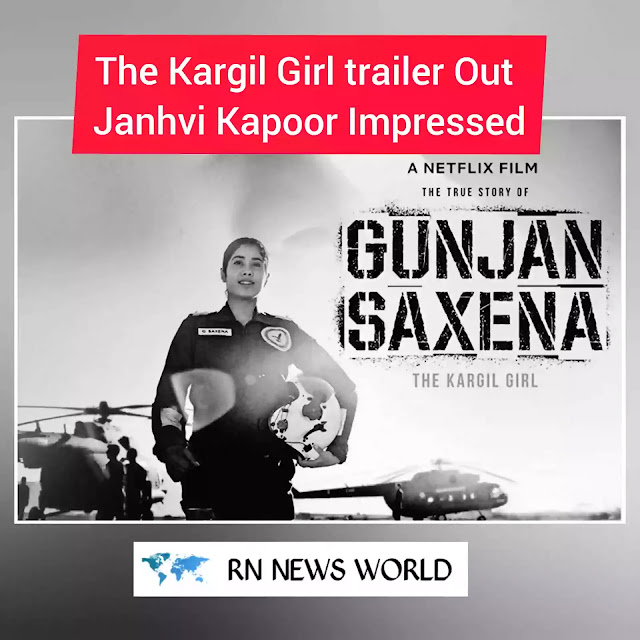 Gunjan Saxena: The Kargil Girl will stream on Netflix from August 12. Directed by Sharan Sharma, the film stars Janhvi Kapoor, Angad Bedi and Pankaj Tripathi.
Actress Janhvi Kapoor’s film Gunjan Saxena: The Kargil Girl will be releasing on Netflix this Independence Day. While the fans have already seen the first look of the actress as the former IAF pilot Gunjan Saxena, the makers dropped the trailer of the film today.
It shows how Janhvi as Gunjan Saxena sets on a mission to make her father proud and carve a niche for herself in the defense forces which was highly dominated by men. In spite of not having women’s toilet and other facilities, Gunjan never gave up and went to Kargil to fight for her country. She became the first Indian female pilot in combat.
Read Also: Dil Bechara Movie Sushant Singh Rajput’s Last Movie
However, after watching the trailer netizens believe that Janhvi Kapoor did not to justice to the role and was ‘too bland’ in the trailer. On the other hand, Pankaj Teripathi, who plays a supporting and encouraging father of Gunjan Saxena, was hailed for his performance.
Boycotting the film due to ongoing Sushant Singh Rajput’s case, people have different opinions on this one. Interestingly, they have even pointed out that Karan Johar’s name is not included in the movie and many believe it is because of the nepotism heat he faced in the last month.
Shah Rukh Khan too shared the trailer of the
film on Instagram. Along with Janhvi and
Pankaj Tripathi, the movie additionally stars Manav Vij, Vineet Kumar Singh and Angad Bedi. The film is directed through Sharan Sharma and produced by Karan Johar below his domestic banner Dharma Productions.
Share Now
More