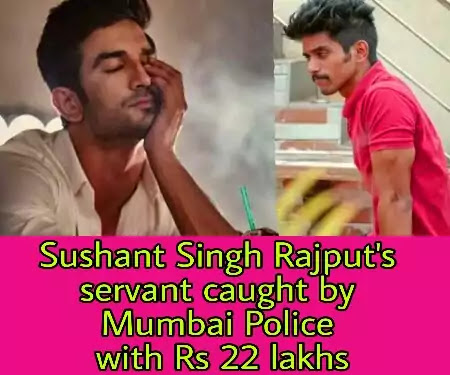 It’s already been more than a month that Sushant Singh Rajput has left us. He was found lyfeless in his Bandra Apartment on the 14th of June. After this incident took place there are several claims about the passing away of this actor. Although the Mumbai police are claiming the actor’s passing away to be self-destruction.

Read Also: Sushant Singh Case investigation handed over to CBI tells Supreme Court
The people and his fans are going wild and claiming it to be a well-planned foul play. In a pursuit to seek justice for Sushant Singh Rajput, every day new revelations and theories come forward. Now a claim of Sushant’s childhood friend Vishal Singh AKA Vishal Rajput is going viral.
During a live session with Sunil Jha, Vishal Rajput made some sensational revelations. During the live interaction, Vishal said that Sushant Singh Rajput’s servant Dipesh was caught by Mumbai Police with Rs 22 lakhs, however, the matter did not come out. If the claims are true then it raises big questions. How such a big amount of money came to Sushant Singh Rajput’s servant Dipesh and why that information was suppressed and never came out in the mainstream media.

Okay,so one of my follower send me these pictures.
The guy in black who was present at Sushant’s home,it seems like he was Dipesh Sawant (sushant’s servant).
Now,look at his hand,the guy in black is wearing a “kada”,Dipesh also use to wear a “kada”.#CooperFoulReportsOnSSR pic.twitter.com/twHTcWmsNp

Vishal also claimed that Sushant departed around 3 AM in the morning however, the police were informed around 12 PM. So another question arises that if Sushant Singh had gone around 3 AM in the morning then what about the statements given by the Sushant Singh Rajput’s servant to the policemen that Sushant had gone for a morning walk and drank some pomegranate juice before going into his room and ha*n*g*ing himself.
Such claims by Sushant’s childhood friend Vishal Rajput puts a question mark on Mumbai Police and some how show case that the Mumbai Police has been compromised. Sushant Singh Rajput’ servant caught by Mumbai police.
Also Read:

Sunny Leone shares a video of her home workout

Therefore the demand for CBI Inquiry by Bollywood actress Rhea Chakraborty and many others is justified. Not only him, but there are also various claims made by the people around regarding Sushant Singh Rajput mysterious passing away. What do you think about the claim of Sushant Singh Rajput’s childhood friend, Vishal Rajput? Do you think that Sushant Singh Servant is also involved in this case?
Share Now
More