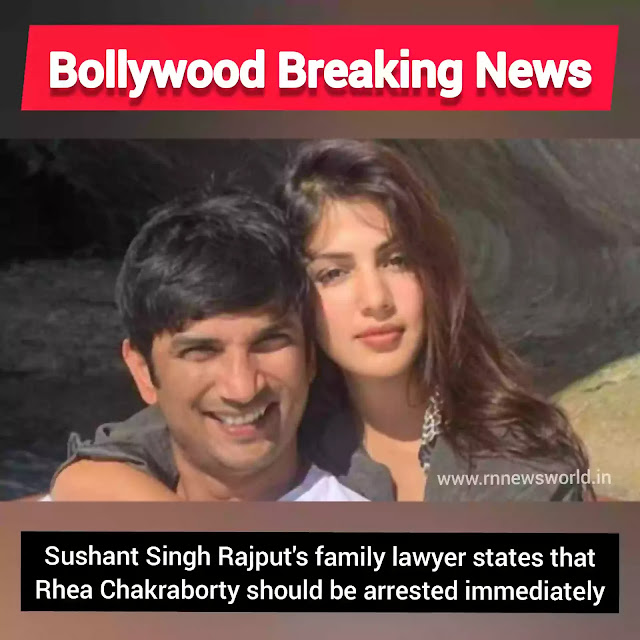 Sushant Singh Rajput’s father Mr KK Singh filed and FIR against Rhea Chakraborty charging her with abetment of suici*de. Several explosive details have been revealed in the FIR.
Now, Sushant Singh Rajput’s Father FIR against Rhea Chakraborty speaking to, Sushant family lawyer, Vikas Singh, revealed that he was expecting Rhea Chakraborty to be arrested over the weekend and is stated that it should happen immediately now.
Sushant Singh Rajput who wanted to leave work in movies and shift base to coorg in Kerala, received no support from Rhea Chakraborty who had told him that he can not shift from Mumbai Town.
Read Also: Mahesh Bhatt records statement in Sushant Singh Rajput suic*ide case
The police station incharge of Rajiv Nagar has been made the IO of this case on the orders of Upendra Sharma, SSP of Bihar Patna. Sushant Singh’s father however had not registered a complaint to the Mumbai police when he was questioned by them in june. He said that he was nothing against anyone.
Patna police station officer Upendra Sharma SSP sent to a team of four Mumbai to investigate the matter. The team consists of two inspectors & two sub inspectors. This team will meet the Mumbai police and get the necessary documents apart from the Sushant Singh Case diary.
Several political leaders and film personalities have demanded a Central Bureau of Investigation probe into his dea*th. Sushant Singh Rajput’s suspected dea*th by suic*ide has also triggered a debate on alleged nepotism and favouritism in the Hindi film industry. Sushant Singh Rajput’s family lawyer says that Rhea Chakraborty should be arrested immediately.
Rajkishor SiJuly 29, 2020
Share It
Facebook Twitter Pinterest WhatsApp
You May Also Like

Know Nora Fatehi Net Worth? Will Nora Fatehi Get Caught In A 200 Crore Money Laundering Case?