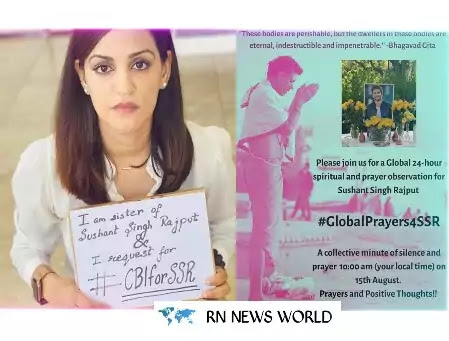 Shweta Singh Kirti, who has been demanding CBI enquiry for her actor brother Sushant Singh Rajput, has just started another initiative, which goes by the name #GlobalPrayers4SSR. She shared a request which read it would be a global 24-hour spiritual and prayer observation for Sushant (SSR).

Through the post, Shweta Singh has also asked people for silence and prayer at 10 am (according to their local time) on August 15, 2020. The post quoted Bhagvat Gita – “These bodies are perishable, but the dwellers in these bodies are eternal, indestructible and impenetrable.”

Please join us for Global 24-hour spiritual and prayer observation for Sushant, so that the truth prevails and we find justice for our beloved Sushant Singh Rajput #GlobalPrayers4SSR #CBIForSSR #Warriors4SSR #justiceforSushantSinghRajput #Godiswithus,” she tweeted alongside the post.

I request you all to please join us for Global 24-hour spiritual and prayer observation for Sushant Singh Rajput, so that the truth prevails and we find justice for our beloved Sushant #GlobalPrayers4SSR 🙏❤️🙏 #CBIForSSR #Warriors4SSR #justiceforSushantSinghRajput #Godiswithus pic.twitter.com/glXWJLf3zl

On Thursday, Shweta Singh took to Twitter to share her message through the video. She was even heard saying that if people do not speak up right now, the family and fans will never get closure in the case. Thus, Shweta states, that the netizens should also demand CBI probe in Sushant’s death case.

Since a few days, Shweta Singh has been sharing videos and images of her brother, with and without his family, to honour his memory. She had also started the trend #Warriors4SSR on Twitter recently. More recently, Shweta had shared a billboard from California, which had #JusticeForSushantSinghRajput written on it with an image of Sushant Singh Rajput the late actor. Shweta Singh Kirti initiates Global 24-hour prayer for SSR