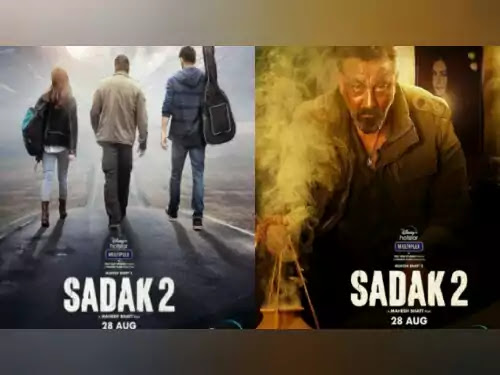 Mahesh Bhatt directorial Sadak 2 is all set to stream on Disney Plus and Hotstar from August 28. On Monday, The film released the first look Sadak 2 posters of Alia Bhatt, Aditya Roy Kapur and Sanjay Dutt, leaving fans intrigued.

Mahesh Bhatt directorial Sadak 2 is all set to stream on Disney Plus and Hotstar from August 28. On Monday, the makers of the much-awaited film released the first look Sadak 2 posters of Alia Bhatt, Aditya Roy Kapur and Sanjay Dutt, fans. They also announced that the trailer will drop tomorrow, i.e. on August 11. The film is a sequel of Bhatt’s 1991 film Sadak starring Pooja Bhatt and Sanjay Dutt.

Ahead of the release of the film Sadak 2, filmmaker Mahesh Bhatt had penned a note for his daughter Pooja Bhatt, explaining his duties, privileges and love for the film. Pooja shared her father’s note on her Instagram account.

Today as we begin the last leg of our journey.I feel unshackled.!! I carry no burden, no weight. No reputation to hold on to. No mission to accomplish. Nothing to prove to anyone.

Read More: Sushant Singh Rajput’s father to CBI: Circumstances leading to death of my son should be probed

If the film works it belongs to all of you. If it does not, it’s mine. That’s the duty and also the privilege of the director. You all gave me so much love and support for which I am very grateful. I love this film because each one of you made this possible. Now I feel like a free bird. My wilderness is calling me. Saying ‘Mahesh chalein?’  the note read.

In Sadak 2, Pooja and Sanjay will reprise their roles. It also stars Jisshu Sengupta, Makarand Deshpande, Gulshan Grover, Priyanka Bose, Mohan Kapur and Akshay Anand. Sadak 2 Produced by Vishesh Films and Fox Star Studios, the movie was originally scheduled to be released in cinemas on July 10.

sadak 2 stream on Hotstar & Disney Plus