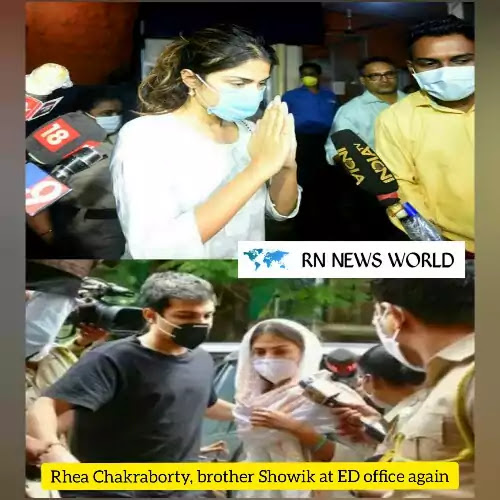 Rhea Chakraborty filed a petition in the Supreme Court demanding the CBI probe to be stopped. Supreme Court hearing has been August 11.

According to sources in the investigation agency, the officials have got hold of electronic evidence in connection with the case and are also investigating phone records of conversations between Rhea Chakraborty, her brother and father.

The Enforcement Directorate (ED) has summoned Rhea Chakraborty again for questioning in connection with the money laundering case lodged against her after death of actor Sushant Singh Rajput.

Bollywood actress Rhea Chakraborty and her brother Showik arrived at the Enforcement Directorate (ED) office in Mumbai on Monday at around 11:30 am today in the related to actor Sushant Singh Rajput’s death case.

Investigations related to the financial aspects of the case are underway after it was alleged that Rhea Chakraborty and her brother had attempted to control Sushant’s life and finances, including bank accounts and credit cards, allegedly to their own financial advantage.

The ED had started probing the case after registering an enforcement case information report (ECIR) based on an FIR registered by Patna police’s Rajiv Nagar police station, on a complaint by the actor Sushant Singh father, KK Singh.

The CBI has also collected documents related to the actor’s death from Bihar Police. The ED has also asked the late actor’s friend, Siddharth Pithani, to appear before the agency on August 8.

FIR against Rhea in Bihar on July 28, the agency registered an Enforcement Case Information Report (ECIR) in the case on July 31. The agency has registered a case against six accused, including Rhea Chakraborty, in connection with Sushant Rajput’s death who was found dead at his Mumbai residence on June 14. Rhea Chakraborty, brother Showik at ED office again.