Nepotism Products Who Are Leaving Bollywood 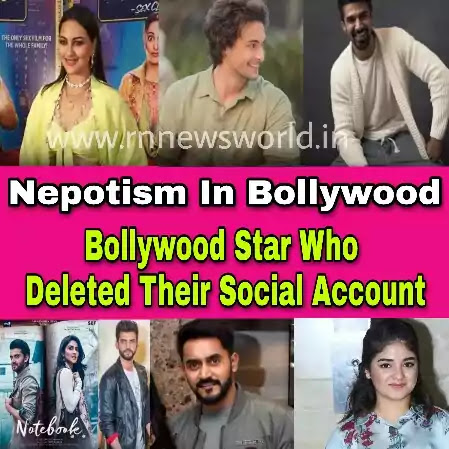 This Bollywood actress and star kid, who was getting hugely trolled on social media, specially on twitter, decided to quit it. On Saturday, 20th June, Sonakshi Sinha put up an Instagram post where she revealed that she is going to quit Twitter.
Sonakshi Sinha had more than 15 million followers on her twitter account where she directly interacted with her fans. But on 20th June, Sonakshi Sinha deactivated her twitter account and she gave reasons for quitting Twitter on Instagram. She said that people spread too much hatred and negativity through twitter and too keep herself away from negative people, she deactivated it.
Read Also

The brother in law of Salman Khan, Aayush Sharma has also deactivated his Twitter account recently after people targeted Bollywood and nepotism. Aayush Sharma was launched by Salman and is a product of nepotism, which is why he was targeted also by people on social sites.
This Loveyatri actor had more than 1 million followers on his Twitter account when he deleted it. The actor wanted to keep himself outside trolls and negativities of people and wants to live with positivity.

Another Bollywood actor, Saqib Saleem also deleted his twitter account recently where people are constantly blaming Bollywood stars for the demise of Sushant Singh Rajput. Recently, the actor wrote a post that said that he was breaking up with Twitter to keep himself away from people, spreading fake news.
He wrote that Twitter was a very great platform where he gathered knowledge and understood many different points. But to him, it turned into a ground for blaming people and spreading fake news recently and he wanted not to be a part of it.

This Bollywood actor, who started his acting career with the movie Notebook along with Pranutan Bahl, was launched by Salman Khan. Zaheer also could not take all the negative posts of people, blaming Bollywood stars and industry for the demise of Sushant Singh Rajput.
The actor did a post where he bid Good Bye to Twitter and posted it on Instagram and deleted his twitter account. On his Instagram post, Bollywood actress Sneha Ullal, also commented that she was thinking to delete her twitter account too.

Because of the toxicity and fake news, spread by people on social media, director of Dhadak, Shashank Khaitan recently deleted his twitter account. After the sudden and unfortunate demise of Sushant Singh Rajput, people are constantly blaming Karan Johar for nepotism.
Shashank Khaitan, who was launched in to the industry by Karan Johar, with Badrinath Ki Dulhaniya, could not take this humiliation of KJo. The filmmaker shared a post where he addressed Twitter as the breeding ground of hate and negativity.

The Sky is Pink actress, Zaira Wasim, recently deactivated her twitter account, as she was getting trolled badly.
She was trolled mercilessly by people for one of her religious posts, that she shared on social media.
Share Now
More