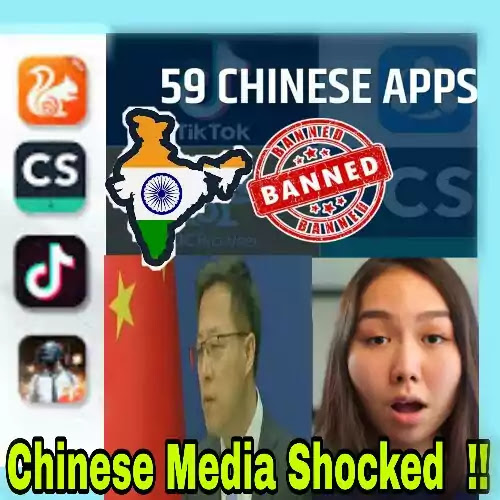 For the last few weeks, China has been playing mind games with India on many fronts. Now in one bold move that even many Chinese experts could not predict by banning multiple Chinese apps.

India has changed the entire scenario. According to the Chinese government’s mouth piece, ultra nationalism appears to have taken over India, which is responsible for costs for boycotting Chinese products. Well, Chinese media Reaction can say what it wants.
But the official statement from India cites data security as its primary concern, so that this move from India come as a shock to China. The answer should be yes. It should be pointed out that some experts in China are almost over confident about India’s reliability on Chinese products.
And it appears that India has finally started to respond. But there is one thing that some Chinese analysts tend to forget. Why should China complain anyway, if China can ban American apps in China, India can also ban Chinese apps in India experts believe that if China doesn’t change its ways, things can even worse for China.
After seeing India’s bold move, other countries may start banning Chinese apps to Yes, it can happen. It could be America. As far as TikTok is concerned, they were concerned voices in America long before the recent tensions between India and China.
So will this move have an economic impact on India? The answer to that question should not be very complicated. There is nothing that can be considered more important and valuable than India’s national security.
The financial aspects of a nation security are so high that any economic gain due to such apps is too small to even consider the amount that India is forced to spend for its defense preparedness due to a hostile neighbour and the sacrifices of Indian soldiers are very valuable for India. Instead of calculating the economic impact on India.
China should worry about the future of these Chinese apps. India, India of its massive young and tech savvy population is a golden bird for any tech startup which has global ambitions. As far as India is concerned, this only signals and massive economic opportunity for Indian apps and startups.
This ban doesn’t mean an end to the aspirations of Industrial Age means a new beginning. If India plans things well, some day made it India apps will challenge the Chinese apps in the global market. Finally, if you’re curious to know about the researches and studies which confirm how these Chinese apps hurt India’s national interests.
You try to look into your phone and you will see that Chinese apps have taken all over your phone from social media to gaming and more or may be your phone is Made in China.

1 Xiaomi / Redmi / Mi
2 OnePlus
3 Vivo
4 Oppo
5 Realme
6 Meizu
7 Coolpad
8 Huawei
9 Gionee
10 Lenovo
A recent study reveals that India has been the world’s fastest-growing app-market over the past few years. India over billions of  potential users and these apps have been successful in luring the users to download them.
Share Now
More