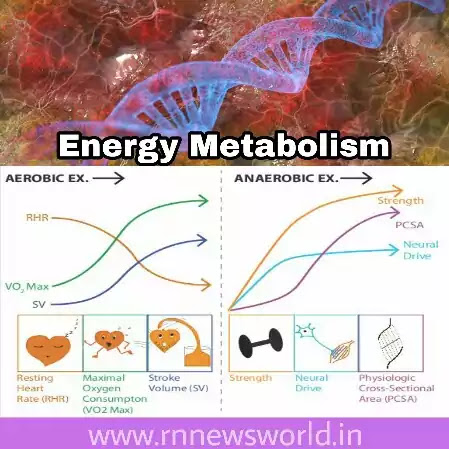 What are the differences between aerobic and anaerobic metabolism?

Have you noticed that glycolysis, beta-oxidation, and the citric acid cycle are always referred to as aerobic metabolic processes, although none of their reactions require oxygen? In this course on energy metabolism, we saw that just the last step of the electron transport chain depends on oxygen.

The protein complexes remain reduced and can’t pick up any more electrons from the reducing equivalents. This leads to excess NADH and H+ and FADH2, as well as a decrease in NAD+ and FAD. The equilibrium shift to their reduced forms inhibits beta-oxidation, glycolysis, the pyruvate dehydrogenase complex, and the citric acid cycle.

As a result, acetyl-CoA accumulates, which further enhances inhibition of the pyruvate dehydrogenase complex. When no aerobic metabolic processes are available to a cell.

How does it generate ATP?

One means is the conversion of two molecules of ADP to ATP and AMP via phosphate group transfer. In the mitochondrial intermembrane space, there’s even a dedicated enzyme for this reaction, adenylate kinase. In muscle cells, adenylate kinase provides energy for a short time. Another means is the transfer of phosphate from creatine phosphate to ADP, yielding ATP and creatine. This phosphate transfer is catalysed by mitochondrial or cytosolic creatine kinase.

However, the most important source of ATP in oxygen deficiency is anaerobic glycolysis. As for aerobic glycolysis, glucose is initially broken down to form pyruvate. Though, pyruvate isn’t converted into acetyl-CoA and metabolized in the citric acid cycle: It’s converted into lactate by the enzyme lactate dehydrogenase. During lactate production, NADH and H+ isoxidized to NAD+.

This is how the process regenerates just enough reducing equivalents to maintain glycolysis. Since lactate production occurs immediately after glycolysis, it’s sometimes referred to as the eleventh reaction step of anaerobic glycolysis. Yet, ATP production without oxygen has some disadvantages.

The conversion of AMP back to ATP is energetically unfavorable. The creatine phosphate supply is very limited and can only be used for ATP synthesis for a short period. Finally, the anaerobic metabolism of pyruvate provides less than one-tenth of the amount of energy produced by aerobic metabolism.

Anaerobic glycolysis yields only two ATP molecules per glucose, whereas aerobic glycolysis, the citric acid cycle, and the electron transport chain yield a total of 32 molecules of ATP. Another disadvantage of lactate productionis that it lowers tissue pH.

But don’t be misled Lactate is indeed the anion of lactic acid and dissociates to lactate and protons under physiological conditions. Still, elevated lactate is most likely not the direct cause of the decrease in pH. The acidic effect is usually attributed to proton cotransport processes triggered by lactate transport.

To protect cells from damage, lactate dehydrogenaseis inhibited by a low ambient pH value, limiting the acidic effects. Also, lactate is actively eliminated by the body. If you’re interested in which processes play a role.

Despite the disadvantages described, the body needs to provide anaerobic energy. Aerobic metabolism in muscles can’t start directly, even if the oxygen supply is adequate. This initial period needs to be bridged by anaerobic processes. In other words: the immediate energy supplying muscle cells is always anaerobic.

The course, anaerobic processes are always required for gaining energy in the absence of oxygen. As the breakdown of carbohydrates and fats usually requires vast amounts of oxygen. This quickly becomes evident when looking at the chemical equations of the breakdown of glucose and palmitic acid: To convert one molecule of glucose into water and carbon dioxide, six molecules of oxygen are required.

Looking at the whole body, aerobic and an aerobic metabolism always occur simultaneously, although never in the same cell at once. Physiologically, anaerobic energy production is also vital for cells operating beyond the aerobic threshold or contributing to high-speed strength processes. It’s also important for cells without mitochondria, such as erythrocytes.

These cells lack the cellular structures required for beta-oxidation or the citric acid cycle. Lactate metabolism has important clinical implications: As already mentioned, lactate production leads to a decrease in pH.

In severe cases, lactic acidos is can occur. As a result, the serum pH drops below 7.35,while lactate levels increase above 4 mmol/L. Lactic acidosis belongs to the metabolic acidosis group and requires urgent treatment. Although it occurs rarely, it’s often fatal,as a pH below 7 is incompatible with life.

A potential complication of liver failure. Some drugs can also cause lactic acidosis. One such drug is metformin,  The metformin is a drug that’s used to lower blood glucose levels in the treatment of type 2 diabetes mellitus. It’s eliminated by the kidneys so, in patients with severe renal failure, it may accumulate in the body. This accumulation enhances metformin’s effect Inhibition of complex.

Aerobic metabolism requires oxygen to remove electrons from the electron transport chain. Without oxygen, the reducing equivalents are no longer regenerated, leading to excess FADH2 and NADH and H+ and depletion of FAD and NAD+. As a result, aerobic glycolysis, beta-oxidation, the citric acid cycle, and the pyruvate dehydrogenase reaction are inhibited.

Adenylate kinase or creatine kinase reactions are a short-term source of energy if oxygen levels are depleted. Pyruvate is converted to lactate, there by replenishing just enough NAD+ to be used to continue producing pyruvate from glucose. Anaerobic processes provide significantlyless ATP than aerobic processes.

Anaerobic glycolysis yields only 2 molecules of ATP per glucose, compared to 32 ATP molecules in aerobic glycolysis. Anaerobic metabolic processes are further required to bridge the initial period of aerobic processes, to provide energy to cells with depleted oxygen levels, as well as in cells that don’t possess mitochondria, such as erythrocytes.