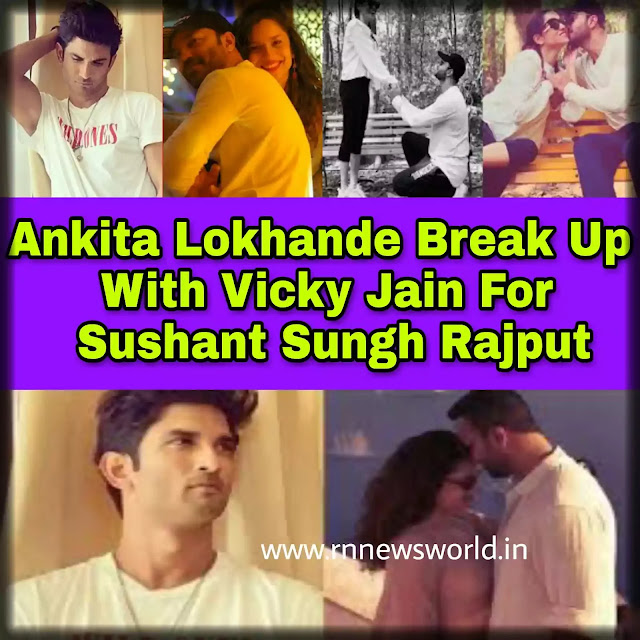 After the passing of the Bollywood top-notch actor, Sushant Singh Rajput, his ex-girlfriend, Ankita Lokhande was traumatized and badly shocked.

Like all the fans, she is also deep into her thinking about why did Sushant Singh Rajput takes his life? Amidst of this tragic situation, several reports suggest that Ankita Lokhande break up with her current boyfriend Vicky Jain, who is a businessman.

Ankita Lokhande and Sushant Singh Rajput‘s relation was appreciated during their times in the TV serial, Pavitra Rishta.

They were planning to get married soon but unfortunately, they had a break up after 7 years of wonderful relationship. They broke up after Sushant Singh Rajput left the TV serial world and stepped into the Bollywood.

Even after break-up, they were highly asked by the fans to be together but that didn’t work out. But recently, when Sushant Singh claimed himself on 14th June, Ankita was severely traumatized and was in a huge shock.

She got worried a lot that she even went to meet his parents on Patna, Bihar. She is the only one in the industry who went to meet Sushant Singh Rajput‘s parents in his home town.

Being this worried after her ex-boyfriend left, this was not going easy for her current boyfriend Vicky Jain. Also, Sushant Singh Rajput‘s fans went against him in social media and he had to face derogated comments in his Instagram handles.

The comments were so rampant that he was forced to make his Instagram comment section limited. After Sonam Kapoor, Alia Bhatt, and Karan Johar in Bollywood, he limited the comments on Instagram.

But this didn’t end up well. Vicky Jain, after facing this brutal backlash by the fans of Sushant Singh Rajput and Ankita Lokhande, wanted Ankita Lokhande to speak in favor of him.

He wants her to address Sushant’s and her devastated fans after the tragic news of 14th June. But amidst her traumatized state, she didn’t choose to come into the media but she wanted the reasons for the loss of her ex-boyfriend, Sushant Singh Rajput.

After this decision of Ankita, Vicky was so upset with her and they ended up on fighting. After several discussions and fights, they chose to fall apart, and unfortunately, they break up their relationship.

Ankita Lokhande was engaged with Vicky Jain a few weeks before the passing of Sushant Singh Rajput. And Sushant’s psychologist recently revealed that Sushant was always regretting breaking up with Ankita Lokhande.

This statement of the psychologist arises more big questions on the audience. What’s your take on this? Did you think Sushant ended up due to Ankita’s engagement with Vicky Jain?